Muay Thai kick to the body

My interest in human movement led me to doing some 3D modeling. I purchased an 8 strobe Optitrack system and asked an amateur fighter to put on the reflective suit and demonstrate his body kick. After I captured the movement, I discussed some of the findings in this animation.

The most interesting thing about the clip is the overhead view. I realized that nobody has ever considered what a kick looks like from the top: when you observe it from this position, it quickly becomes clear that the kick is generated from the top down -- the shoulder girdle clearly rotates first and reaches it's peak torque prior to the completion of the rotation of the pelvis. If you go train in muay thai, it's not uncommon to hear a reguritated coaching dogma, namely, "Turn your hip over", which is somewhat true but really just betrays a lack of ability to consider the kick as a movement that is fundamentally a top-down kinetic chain. 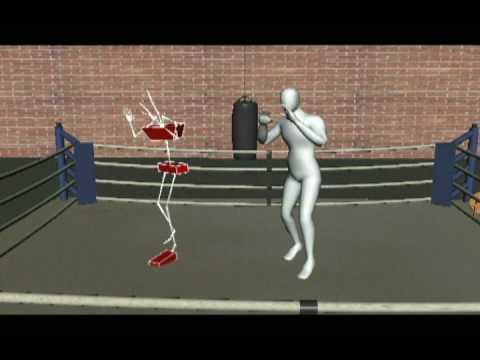